All about keeping the pace, despite all. So here we continue with an additional release upon our successful v9. Wishing it to add up on the software strong basis - with a number of fixes included - and to continue bringing valuable new features for all of you.

As usual, a list of things to extend the range of race configuration possibilities and to maximize the ergonomics of the solution - not to say the pleasure to use it.

Some new implementation for acquisitions

The BeChronized acquisition is updated to comply with the new system Ceres G3.

The Online passings acquisition can be plugged on Rufus Cloud Service from Macsha, to allow downloading your data on Wiclax.

Still through the same Online passings acquisition, you can connect to DotVision API and take advantage of their geo-fencing timing capacities. The passings get down to your event file just like any regular acquisition.

Tag Heuer devices equipped with a modem can be set up to synchronize their data with your Génialp cloud service. Backup and import service, but best of all instant forward to your Wiclax event. More to see in your service administration page if you're still to discover it.

No new release without bonus gifts to the most visible part of the solution! We've worked this time on these topics, as you've probably noticed already through our Facebook posts:

Making some progress on this feature, aiming to enrich your results online with some pictures of participants.

Currently possible in one way, which reuses the fact that the athlete summary is looking for a <bib-number>.jpg file in the event folder. In case the picture found is less than 150px, it's assumed it's something like a user profile picture and is positioned and styled this way: 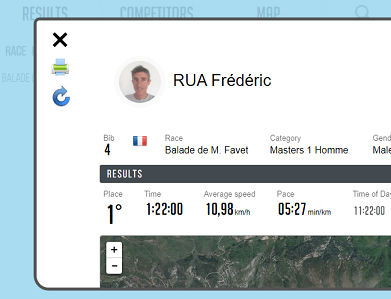 Of course limited as you won't often have such a set of pictures, named after bib numbers. So we're working on more flexible options like looking up in a centralized folder, having something else than the bib as an identifier, or calling a custom URL that will return an image (from a DB or whatever). More on that soon, waiting for that don't hesitate to share your own use cases.

Want to present your race results in a more colorful way, or to get them closer to your brand colors? This is now possible! More information about it in this post. 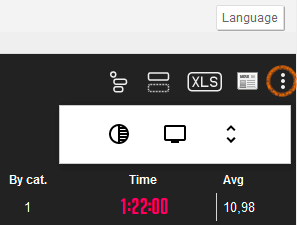 The new menu - intended to remain discrete on the main page - gives a definitely simpler access to those features mainly useful on the local area: switching the dark/light color themes, running the TV mode - auto scrolling or not.

2 different concepts are getting developed in parallel:

This second concept is now coming live, opening some new possibilities to manage sports where points are participating to the rankings.

Some details about the implementation:

Passings to ignore on acquisitions

Useful feature when an acquisition is running as an automated file import, or is plugged on a cloud data service: when a passing has to be eliminated for some reason, the risk exists that it keeps coming down again and again if it's still in the original data and in the time period scope.

To avoid that, you can now put an 'ignore' flag on some passings from the history.

New menu is available at the bottom of the result entry form, below the time lists. Click All first to display the whole history and then you can locate some records by filtering a bib number for example.

On printout: ability to print only selected rows from the current grid. Simply by launching a print preview after selection is made. A confirmation will be prompted.

Team ranking: for the case of a points based ranking, you can now specify a number of best results to keep.

Emails: new context menu item Send an email for a competitor or a selection of competitors in the grid. Opens the system's default mail client and initializes the message.

Races without ranking: the option to publish an event without ranking (i.e. only performances are displayed for athletes, which are simply sorted by their registration order) is now available at the race level. Allowing to manage such a race among regular ones in the same event file.